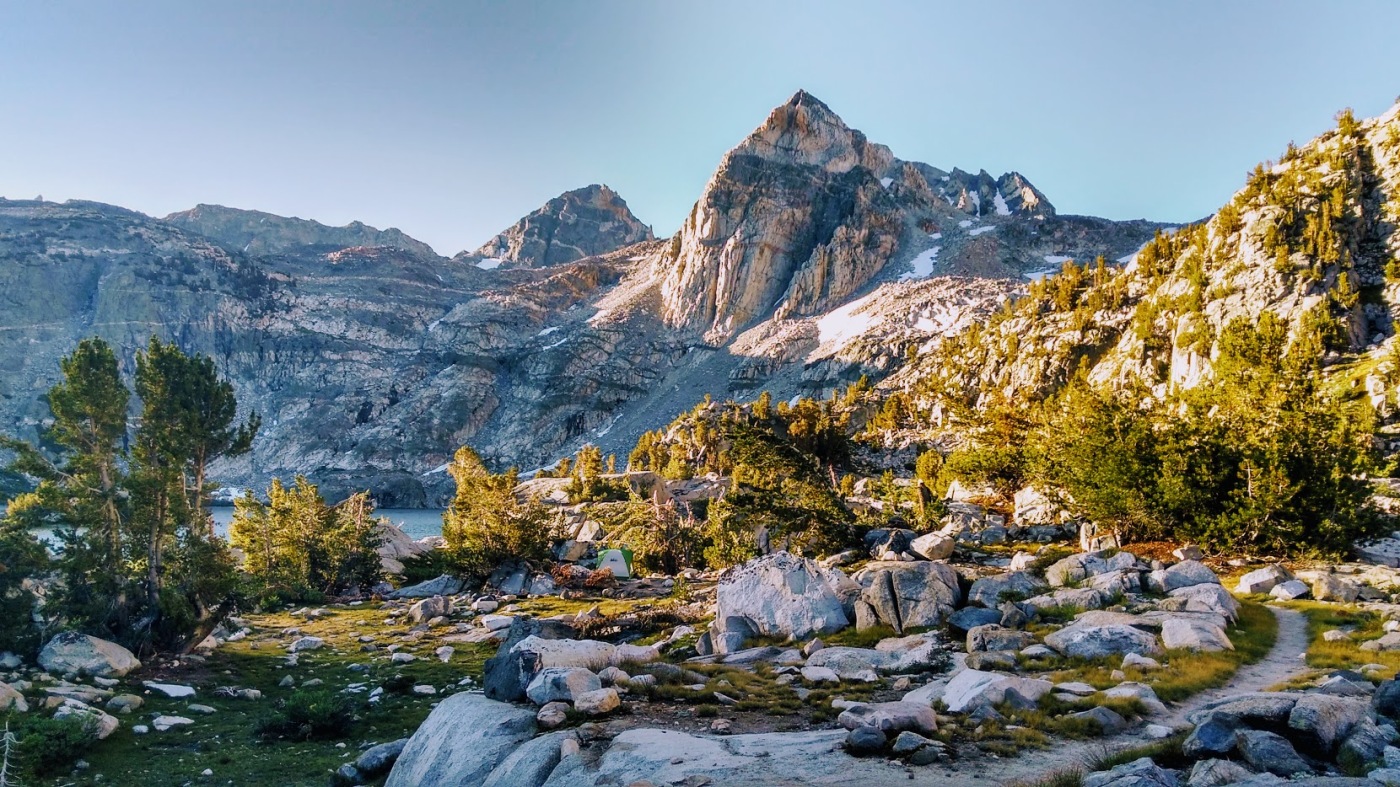 “The mountains are calling and I must go.”
-John Muir

Contents: Highlights, my itinerary, general trip report and photos, and Half Dome Permit Info for JMTers

Thank you Fanny and Larry for organizing this incredible trip; due to personal schedule I ended up solo’ing it after Day 1. My recent back surgery meant I wanted to  take my time… Happily, this body of mine did quite well though there were times when I felt I’m getting too old for this. It’s been a while since I’ve done a solo backpack and it was the absolutely right choice this time around.

“Thousands of tired, nerve-shaken, over-civilized people are beginning to find out that going to the mountains is going home; that wildness is a necessity; and that mountain parks and reservations are useful not only as fountains of timber and irrigating rivers, but as fountains of life.”

“Looking eastward from the summit of Pacheco Pass one shining morning, a landscape was displayed that after all my wanderings still appears as the most beautiful I have ever beheld. At my feet lay the Great Central Valley of California, level and flowery, like a lake of pure sunshine… And from the eastern boundary of this vast golden flower-bed rose the mighty Sierra, miles in height, and so gloriously colored and so radiant, it seemed not clothed with light but wholly composed of it, like the wall of some celestial city…

Then it seemed to me that the Sierra should be called, not the Nevada or Snowy Range, but the Range of Light.”

A general trace of the route shows JMT stats at 353km (219 miles) and 13,240m of elevation gain not including Lembert Dome summit, Half Dome summit, or Fin Dome attempt. This is in line with the signposts markers. As for elevation, the trail looks deceptively flat in the elevation charts –  don’t worry; it’s a challenge.

The first week I hiked around 9 to 11 hours per day, 16 to 21 miles per day. Do plan for inclement weather. The last thing you want, while on vacation, is to feel rushed or unsafe heading up those high passes in lightning and hail. I camped mostly above 11,000ft. with winter gear rated to -12C and was fine. Side trips: Mount Whitney Summit (3 hrs round trip from the JMT Trail Crest pass), Tawny Point Summit (1 hr round trip from the JMT Bighorn Plateau), Fin Dome attempt (2+hrs round trip from the JMT Glen Pass/Rae Lakes area). I picked up my only food resupply at Vermilion Resort and took the ferry ($13) back out to the trail.

The second week I took a whole 6 days to do 55 miles at tourist pace, 6.5 to 8hrs a day, 13 to 16 miles per day. The northern end is much easier, terrain-wise and elevation-wise, than the southern end. There is also a lot more tourist infrastructure, if you want cold drinks, fresh food, showers, laundry, and the camaraderie of established campsites. In the last half I wore trail shoes instead of boots. Side trips: Devils Postpile National Monument (alt route from JMT), Lembert Dome summit (Tuolomne Meadows area, Yosemite NP, a under 2 hrs trail run-hike), Half Dome summit (Yosemite Valley area, 2 hours round trip fast walk from the JMT Cloud’s Rest junction).

I took an extra day at the end of the JMT to explore Yosemite NP as it’s been a while since I’ve been there. Backpackers do not need a reservation at the Backpackers Walk-in campsite in Yosemite Village (access from North Pines campground, $6 self-registration), but are only allowed to stay a single night pre- and post-hike. I took the YARTS bus ($13, no reservation needed, 4 times a day) to the city of Merced, where one can then easily board the Amtrak to San Jose, San Francisco, or another major city for onward travel.

We started the JMT at Whitney Portal. The wilderness pass is issued by Inyo National Forest in Lone Pine CA. It includes permission to summit Mt. Whitney but not Half Dome. If you were not successful in the spring Half Dome lottery and would still like to summit Half Dome as a JMT side trip, you must:

A) Replace your existing Inyo wilderness permit with a Yosemite wilderness permit. While in Tuolumne Meadows, go in person to the wilderness office and stand in the first-come-first-served line and hope that cancellations have freed up spots. Permits are issued starting at 11AM so get there early. Note that you cannot do this in Yosemite Valley; permits are issued only at the Tuolomne Meadows wilderness office. Your (new) Yosemite permit is valid starting the next day – use your Inyo permit to camp that night. The Yosemite permit allows you to summit Half Dome any day within the valid timeframe of your permit.

B) Apply online or by phone for a day-use permit for Half Dome per the official website. Parks considers this a last-ditch effort. It is a very competitive process.

I was not successful in the Half Dome day-use lottery, but secured a Yosemite wilderness permit in person.

The beauty of the route for me was in the changing scenery day by day – the granite was still granite, but seemed to round out and soften as the days went by and as I hiked into different areas of the Sierra. Scrub turned to trees, rocky paths became sandy. There’s a tremendous amount of trail maintenance that must happen on the JMT. I’m grateful to those who work on the paths.

A Preface to The Girls’ Guide

Many women, including me, object to being called “girls” – only a select few of our best-ies are permitted to use it. (Being referred to as “la demoiselle canadienne”, in contrast, is always welcome.) But here when I say “girls”, it is an invitation of intimacy and conspiracy between you and me.

This "blog" is a very scientific, serious, and rigorous social study of human interaction in the mountain arena. I hope it inspires possibility and adventure. Enjoy!