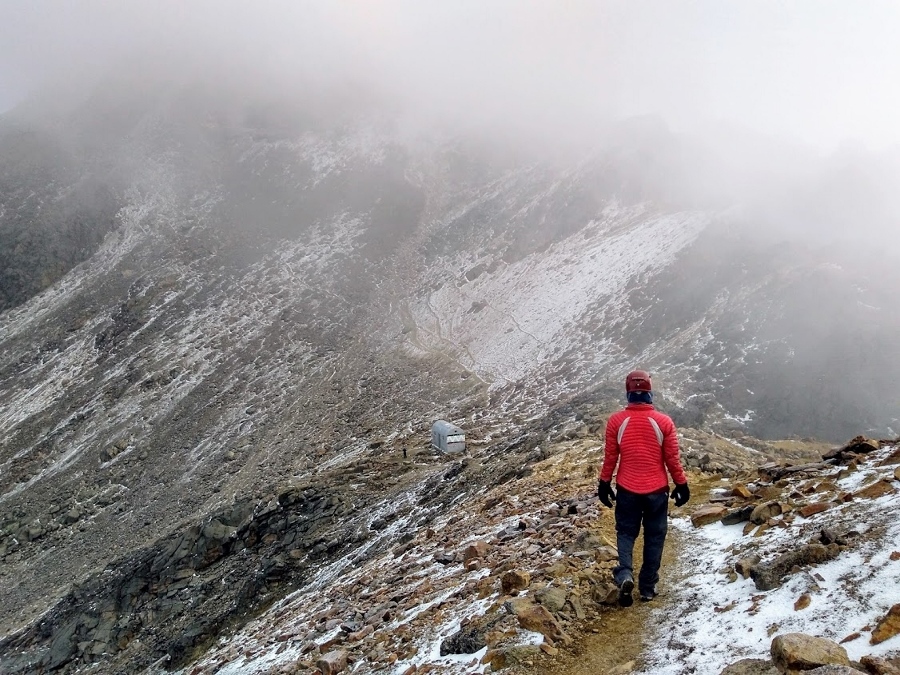 Like other peaks in Mexico, Izta is associated with a love story:

In Aztec mythology, Iztaccíhuatl was a princess who fell in love with one of her father’s warriors, Popocatépetl. The emperor sent Popocatépetl to war, promising him Iztaccíhuatl as his wife when he returned (it was presumed he would not).

Iztaccíhuatl was falsely told that Popocatépetl had perished in battle, and believing the news, she died of grief. When Popocatépetl returned to find his love dead, he took her body to a spot outside Tenochtitlan and knelt by her grave.

The gods covered them with snow and changed them into mountains.

Iztaccíhuatl’s mountain is called “White Woman” from Nahuatl iztac “white” and cihuatl “woman”, because it resembles a woman lying on her back, and is often covered with snow. The peak is sometimes nicknamed La Mujer Dormida (“The Sleeping Woman”. Popocatépetl became an active volcano, raining fire on Earth in blind rage at the loss of his beloved. (Wikipedia)

Now I know that a lot of you are dead set against paying for a guide for straightforward outings like this. I was fine to have someone else deal with logistics and meals, and whisk me back to town after the fun ended.

In previous communications Nómada México had been careful to let me know that, say,  I would be grouped with another single female traveler from Colorado, or say, NYC. This time info of that nature wasn’t supplied, so I figured that my companions would be a group of guys… And probably guys who don’t speak English.

It was to my surprise then that it was a young woman who greeted me as I boarded the Nómada shuttle. “I love this time of year in México City,” she enthused. “The purple jacaranda are everywhere!”

The drive around town to pick up the rest of the group (6 clients: 3 guides) served as a mini tour of the city as it readied itself for Semana Santa/ Easter. This was going to be a great trip.

The tour company had another group (private trip) with their own guides that we’d “sort of” join for the night, but we wouldn’t know that until later. I will call them Group2.

Here’s a brief timeline of the trip. Times are approximate.

17:00 – Arrive National Park Visitor Center at Paso de Cortés. Short 1-2 hr sunset hike up to “Snail Hill” in light rain. It just wouldn’t be a mountain trip without rain now, would it…

19:00 – Supper at the Visitor Center made by the guides. A newly dead owl lies in the corner of the kitchen by the window, inciting discussion.

22:00 – We’re supposed to sleep on the floor of the Visitor Center but the police need the space so we drive to a station building (?) up a steep bumpy hill. The driver takes running starts to overcome ruts; we all would have been more vocally appreciative of his driving acumen were we not quite tired by then.

Group2 is already at the station and we wake them up in the confusion of choosing bunk beds. The mattresses overhang the bunks. R from UK, who is also on a top bunk, suggests from across the room that I put my stuffsack alongside my body to prevent myself from rolling too far, thereby tipping the mattress and creating an accident. I haven’t been in a bunk since Durango, which seems so, so long ago. This also reminds me of Mt. Haig, when Jonas put my backpack against my side so I’d know when I might be sliding off the rock ledge. The bunk bed ladder is interesting.

The lavatory is interesting too: “The thing is, it’s so easily fixed,” DB from Virginia commented later. I take it he also had the unexpected thrill of grey water splashing directly onto his feet.

23:00 – The lit fireplace in our room evokes the Mexican equivalent of hezellig but it’s so smoky that my throat hurts and R becomes concerned about CO poisoning. He opens the window even more and douses the fire to everyone’s relief. I’m fondly reminded of a certain ice climbing trip during which it was too cold to open the window much, so we just shut off the CO monitors that kept going off…

02:30 – Wake up. Made myself a PB, nutella, & lettuce triple-decker sandwich for lunch (I know, delicious, right?!) as I’m still off queso y jamon from the endless queso y jamon recently experienced in Patagonia. Drive to La Joya trailhead (3990m).

09:00 – Reach the refugio at 4700m and 2.5 miles. Yes it really takes me that long because: altitude, and because: out of shape. Anna, a guide from Group2, is at the crest and she radios in news of my arrival. As she leads me to the hut she tells me there’s a guy from Group2 I will join, and that it will be a better pace for me.

B from Ethiopia, with whom I had been charged with staying, is feeling altitude sick and isn’t doing well. It’s been nice to hike with a partner regardless, which was our guide’s initial intent.

We have finished the “feet” of the Sleeping Woman. The section from the refugio up to the “knees” is the most strenuous section. I take a break with Anna and her client DS at the refugio as B catches up.

09:30 – Start up the “knees” with Anna, her client DS, and B. Anna’s great at leading and setting the pace; up to now the guiding style has been to follow behind the client. Anna’s awesome, and DS turns out to be less taciturn than I’d initially imagined, so it’s quite a pleasant hike up.

11:00 – B encounters severe difficulty. We wait for a guide coming down with R, who was ahead of us but has decided to turn around; R’s guide will descend with B.  Anna, DS, and I continue up to our goal of 5000m.

11:30 – We reach 5010m and call it good. There’s less than 2 miles and around 200m elevation gain left to the summit at the “breast” of the Sleeping Woman, but it’s expected to take another 3-4 hours with a small glacier crossing at the “belly”. Too bad, because it’s where the more interesting stuff starts. Eh well. Next time.

R joins Anna, DS, and me in the descent.  It starts to hail heavily but I have a lot of fun going down with this particular group. It’s enjoyable partly because I think we are well matched. It’s all pretty casual.

Considering I wasn’t even going to hike much on this Mexico trip, not summitting was fine. We were fortunate to have had it all: moon, sun, fog, hail, snow. Next time I’d acclimate in advance and in general be in better shape. Spikes would have been fine for the glacier conditions on our day; no need for crampons or the mountaineering boots I carried just in case.  We carried an ice axe each but I don’t think anyone used it (I don’t think most of my group knew how to use it).

My old trail runners were fine to where we turned around and probably would have been fine the whole way other than maybe getting wet and cold feet if you encounter precipitation. None of our group summitted due to weather. An earlier start could be beneficial. Group2 except DS summitted as they held a faster pace that kept them ahead of the weather.

Thank you so very much to Nómada Mexico! All guides and staff, and cheers to my hiking group. Here’s to many more mountains in our future.

A Preface to The Girls’ Guide

Many women, including me, object to being called “girls” – only a select few of our best-ies are permitted to use it. (Being referred to as “la demoiselle canadienne”, in contrast, is always welcome.) But here when I say “girls”, it is an invitation of intimacy and conspiracy between you and me.

This "blog" is a very scientific, serious, and rigorous social study of human interaction in the mountain arena. I hope it inspires possibility and adventure. Enjoy!